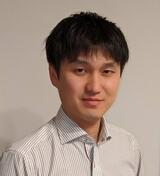 Recently, micro LED displays showing high brightness and low power consumption have attracted attention as next-generation displays to replace LCDs and OLEDs. It is expectd that the micro LED market will rise rapidly in the near future. The field of activity of micro LED is not only display application but also lighting and display for automobile from the viewpoint of safety and security, smart fiber for fasion, spatial light communication (Li-Fi) and optical communication using plastic fiber, and underwater optical communication technology.

We are focusing on the development of micro LEDs in the field of optogenetics. Optogenetics is a technology that can selectively manipulate specific neurons with light by gene transfer technology. With this technology, it is possible to clarify which nerve plays what role. Optical fibres are generally used for optical stimulation. Even though these fibres are effective for this purpose, they restrict the free movement of animals because they are connected to the animals. Furthermore, it is difficult to achieve multipoint stimulation with high spatial and temporal resolution. Micro light-emitting diodes (mLEDs) have attracted attention because they can be driven through a wireless power supply and can be placed in any location. We are challenging the development of micro LED devices for optogenetics. 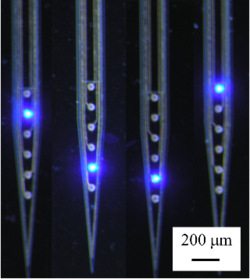 Although optical stimulation using optical fiber has been performed in the past decade, there are restrictions on the types of action in experimental animals connected by fibers. The LED devices enables wireless power supply and multi-point stimulation in the depth direction because they can be easily fabricated smaller or aligned in adjacent areas by semiconductor processing technology. In this study, we are developing a novel optical stimulation tool that enables light stimulation in the a wide area local area by fabricating blue micro LEDs with various sizes and shapes in one neural probe.

Optical manipulation of neural activity is a very effective method for understanding brain function because it has high temporal resolution and reversibility. Recently, for further understanding of brain function, spatial patterned optical stimulation has been attempted. Currently this requirement is achieved animals accurately and continuously without changing the position of the optical stimulation under free movement. The micro LED array implanted in the brain is one of candidates to meet this situation. In this study, we are fabricating implantable flexible micro LED arrays for optical stimulation of brain surface.