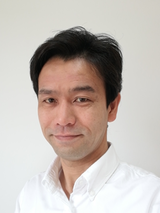 We are interested in fabrication and measurement techniques related to thermofluidic phenomena of micro- and nanometer scales. In particular, we are conducting basic research with a view to engineering applications, regarding the functions of electron and ion transport phenomena in micro- and nanofluidic devices. Recent research topics are below:
(1) Measurements of local electric feilds, conductivity, and pH using glass microelectrodes
(2) Nonequilibrium ion transport phenomena in micro- and nanogaps
(3) Firts-principles molecular dynamics simulation for chmical reaction systems. 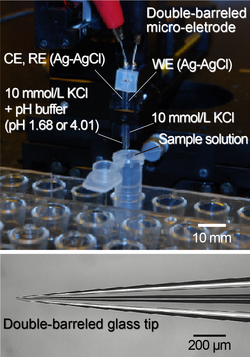 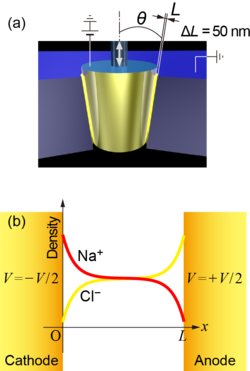 (a) Schematic of a pair of electrode for changing micro- and nanogaps and (b) ionc concentration distributions between the narrow gap electrodes.

Ion transport phenomenon in a liquid is known to consist of electrophoretic (conduction), diffusion, and advection of ions. By investigating the unsteady phenomenon from immediately after a voltage is applied to the steady state, details of the ion transport phenomena in liquids can be elucidated, since each phenomenon has a different spatiotemporal scale. In the present study, the distance between electrodes was varied over a wide range from nm to mm, and the ionic current response to voltage application was theoretically predicted and measured experimentally. As a result, it was found that the electric field was strongly screened because the electrode surface was covered with ions immediately after the voltage was applied, and then the concentration field away from the electrode was slowly formed. This study clarified the dynamics of ion transport phenomena of micro- and nanoscales in detail. 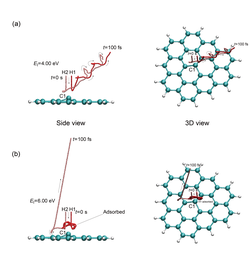 First-principles molecular dynamics simulation for collision of a hydrogen molecule with a distorted graphene sheet: (a) repulsion and (b) dissociative adsorption.[3]

For example, the surface of a two-dimensional structure composed of carbon atoms such as graphene is known to be covered by a cloud of electrons. When atoms or molecules collide with such a stable surface, they will repel. On the other hand, if the surface of graphene is slightly distorted or if other elements are added, the cloud of electrons may be modulated, causing the transfer of electrons between the carbon atoms and the colliding atoms or molecules and resulting in adsorption. In conventional molecular dynamics simulations, it is difficult to simulate chemical reaction systems because the electron transfer is not taken into consideration. It enabled molecular dynamics simulation with movement. As a result, we succeeded in simulating a series of processes in which colliding hydrogen molecules are dissociated and further absorbed on the graphene surface, which has a partially steric structure, as shown in the figure. This makes it possible to simulate both chemisorption and physisorption phenomena of hydrogen molecules on the surfaces, and is expected to be applied to the design of hydrogen storage materials.