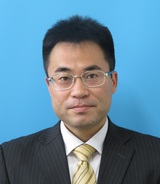 Terahertz-waves (0.1-10THz, 3mm-30um), located in the gap between radio-waves and light-waves, are called as the frontier of light. Terahertz-waves show both properties of transparency in various materials that are visually opaque and invasive nature compared to X-ray and gamma-ray. This ability has opened a wide range of possibilities in various application fields such as security, medicine, biology, astronomy, material science and so on.
This laboratory is pushing ahead with the development on highly sensitive terahertz-wave detectors using superconductor, two-dimensional terahertz spectroscopy and their new applications. 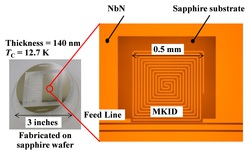 Left: Fabricated spiral-MKIDs on a sapphire substrate. Right: Microscopy image of a spiral-MKID. The NbN film thickness is 140 nm and its Tc is 12.7 K.

Two-dimensional terahertz spectroscopy offers potential opportunities in material science research into soft materials for example, and industrial application development. This laboratory have progressed the development of a Microwave Kinetic Inductance Detector (MKID, Fig.1) array operating at 3 K with a cryogen-free He-4 refrigerator, and exhibiting both superior detection sensitivity of greater than one digit or more compared to conventional semiconductor bolometers, and greater speed response. Such an array aims to realize the application of a 2D-Fourier transform terahertz spectrometer.

Polymer properties such as hardness, fragility, workability, and thermal stability are determined not only by the chemical composition but also the higher-order structure related to the crystallinity, molecular chain length, and chain packing in the solid state. In conventional diagnostic methods employed for general-purpose plastics, destructive techniques to measure tensile and bending strengths and subjective observation of the degree of deterioration such as a change in color or transparency are commonly applied. New analysis techniques are currently being developed to allow nondestructive and objective inspection of plastics.