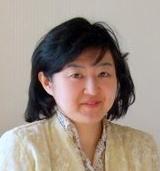 The biochemical, physiological and behavioral processes are under the control of internal clocks with the period of approximately 24 hr, circadian rhythms. The expression of mouse Period1 (mPer1) gene oscillates autonomously in the suprachiasmatic nucleus (SCN) and is induced immediately after a light pulse. Per1 is an indispensable member of the central clock system to maintain the autonomous oscillator and syncholonize envilonmental light cycle.
I constructed Per1:luc Tg mice and rats in which firefly luciferase was rhythmically expressed under the control of the mouse Per1 promoter in order to monitor mammalian circadian rhythms by Per1 rhythmic expression. Rhythmic emission from the cultured SCN slices of Tg persisted for up to some months in vitro, while those from peripheral tissues like liver also were found but damped after two to seven cycles in vitro. It suggests that a self-sustained circadian pacemaker in the SCN entrains circadian oscillators in the periphery to each adaptive phase.
I am performing functional analysis of circadian pacemaker neurons in the SCN by TOYOHASHI original electrophysiological probe.

I recognize intact biostructure ionotropic glutamate receptors (iGluR6) as machinery, which is normally expressed in synaptic neural processes in mammalian brain. To control any neural activity remotely and reversibly, photoswitchable nanomachine?LiGluR?were developed based on iGluR6 and operated using photoiosomerizable new chemicals, MAG. Two iGluR6 mutants could be photo-switched using a series of maleimde-azobenzene-glutamate (MAG) compounds, which dangled 2R,4R-allyi glutamate (G) from a linker containing the photoisomerizable azobenzene (A) that was attached to the introduced cysteines via maleimide (M). Three kinds of MAGs with different linker lengths (shortest :MAG0, middle: MAG1, longest: MAG2) were examined at 16 cysteine positions around the “mouth” of the ligand binding domain “clamshell” from geometry. LiGluR(with L439C mutation): opening in UV light and closing in visible light by all MAGs. In neural cells with LigluR, action potentials were optimally evoked and extinguished by UV and visible light, respectively. These photo-switched nanomachines could manipulate neural activity under optical control both in vitro and in vivo. The researchers could control neural activity to regulate physiology from a mechanistic view. 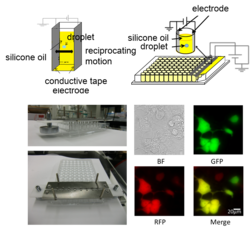 Researchers from Toyohashi Tech have developed a novel transfection method using water-in-oil droplet electroporation: a liquid droplet with exogenous DNA and cells that is suspended between electrodes in dielectric oil is exposed to a DC electric field. This technique can contribute to biomedical innovation in high-throughput screening.
The authors, Assistant Professor Hirofumi Kurita and Associate Professor Rika Numano, said, "This technique will lead to the development of cell transfection in regenerative medicine and gene therapy."

Award of the soroptimist Japan Fundation of TOYOHASHI 2013