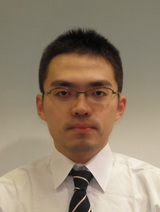 It is becoming more and more important to be present in both people and robots in close proximity day by day.Not only in the factory but also in the home, it becomes commonplace that we live together. What does make people and robots "We"? I focus on "social cues" which people are using in the daily communication and I try to clarify the essence of "human-likeness." Dolls may have given a weird impression to people even if these are elaborately made. Where do people get the impression from? What are people seeing not only appearance but also? I focus on the "Social cues" : the very small cues spontaneously help communication of pepole. I research what happen a robot use these cues in the Human-robot interaction through the development of the system that can observe and analyze these of people.

Theme1：The behavior which robots should have in the real environment 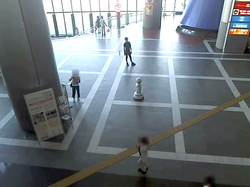 Field experiment in a mall

Theme2：The "Human-likeness" on the Human-robot collaboration

Go/NoGo task experiment by a person and a robot 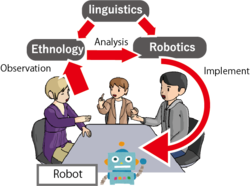 The image of the robot in the human community

The communities such as hospitals, companies and schools wants robots to play do many tasks. How must a robot do to become not so much a tool but a member of the community. By putting robots in a community of people with same roles and using the knowledge of the ethnology, I research the mechanism that a existence become a member of a community.