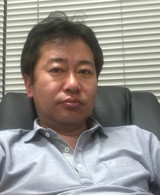 Almost all the humans use spoken dialog, which is the most natural communication method. If we can recognize/manage/ synthesize speech in computers, this speech can be not only the best method of communication but can also be used as data storage media. I am engaged in technologies on spoken language.

Making transcriptions of monologues such as lectures is a very promising research area. We improve acoustic modeling of the human voice using models such as the Hidden Markov Model (HMM) and Deep Neural Network (DNN), and statistical language modeling (N-gram) . We also improve the decoding algorithm.

The first impression of a spoken dialog system for novice users is that it is unnatural, because the time-lag between a human utterance and the system reply is too long and as such the user cannot distinguish whether or not the system works. This is one of the reasons why users do not feel that spoken dialog systems can be used in a comfortable, frendly manner. Thus, we focus on prosodic features like timing and pitch change in a dialog. Our dialog system has begun to speak with appropriate prosodic features considering previous user utterances. When the dialog gets lively, the pitch of the system utterances chase the user's pitch. On the other hand, we also study a semantic dialog strategy. We are now developing a robust and natural response generation method in a system that considers its own misunderstandings.

Human often uses gestures such as finger pointing and gaze to transmit his/her intention. We are trying to realize such interaction between human and machine.
Consider the operation of an autonomous vehicle. How do you let it know where you want to go and where you want to turn? It is useful if you can use finger pointing and gaze. We are developing an autonomous vehicle with such interface!