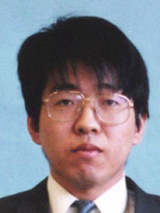 It is said that humans store the semantic network, which is a linked network of knowledge. We suggest a neural circuit model explaining how a human being learns a network of such a semantic network. The outline of the model is shown in Figure. the association cortex 1 layer passes the inputs to the dentatus gyrus, the CA1, and the association cortex 2 layers, and the CA1 layer produces the learned time sequence patters from the association cortex 1 layer via the dentatus gyrus and the CA3. The association area 2 layers are consists of two layer: 2a and 2b; 2a stores episodic memory as personal experience and 2b stores semantic memory. STDP (Spike-Timing-Dependent synaptic Plasticity: STDP) was used to learning rule in association area 2b to examine the relation of STDP observed in physiology and forming semantic memory. STDP is the phenomenon that transmission efficiency changes by relative timing of the firings of connected neurons, and it is thought as the origin of various learning in the living thing. The thick arrows of figure 2 show the nerve connections that change by STDP.