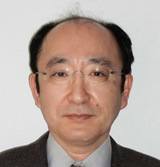 A number of chemicals or wastes are continuously produced by our social activities and are accumulated in the environment as well as in our bodies. These substances may be potentially and unexpectedly changed into genotoxic reagents, causing DNA damage to lead to regulatory dysfunctions of genetic information. Furthermore, it has been well known that excess DNA damage often shortens human lifespan mainly due to an increased risk of various cancers. The problem of "genome environment" is important in ecological life sciences as well as medical sciences. In addition, development of chemical sensing and environmental assessment technologies are in progress. So far, three research subjects have been carried out using model organisms S. cerevisiae and C. elegans by molecular, biochemical and genetic approaches. :
(1) Identification and characterization of novel nematode helicase-related proteins including DRH-3 that play roles in maintenance of genome integrity,
(2) Development of yeast-based assay systems for detecting genotoxicity and chemicals, and
(3) Analysis of soil nematodes by the DNA barcoding and development of C. elegans lifespan-based assay for ecotoxicants.

Theme1：Studies on a novel RNAi gene drh-3 involved in maintenance of genome integrity in C. elegans

We identified a novel nematode gene drh-3 that functions in both maintenance of chromosome integrity and RNA interference (RNAi). Since the relationship between RNAi and chromosome regulations has been largely unknown, we have focused on functional analyses of DRH-3 protein in C. elegans. This study will contribute to progress in basic biomedical sciences.

It is important to detect genome toxicities of chemicals and waste products. We have developed the biosensing assays by recombinant reporter yeasts for detecting genotoxicity. We also tried to develop recombinant yeasts for sensitive detection of genotoxicity by using the CRISPR/Cas9-mediated genome editing technology.

We are developing novel DNA barcoding technique of soil organisms, especially soil nematodes using the next-generation sequencer for evaluating soil environment. We developed a novel lifespan-based assay for detecting biotoxicity of materials. This test will be useful for risk management of wasted chemicals because nematodes including C. elegans are majority of the living organisms in soil.