A submillimeter-thick film with magnetic microdomains was used to control a Q-switched laser, increasing its pulse power 1,000 times 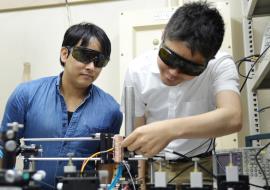 Researchers at Toyohashi University of Technology and their colleagues have fabricated the first magneto-optical (MO) Q-switched laser. Unlike electro-optic (EO) and acousto-optic (AO) effects, MO effects had not previously been used in Q-switched lasers, even though they are also very well-known phenomena. The fabricated MO Q-switched laser contributes to the development of compact high-power lasers.