On December 19, we hosted the ASEAN University Presidents Forum in our education base in Malaysia (Penang).

Since its founding, our university has accepted many international students from universities all over the ASEAN region and undertaken collaborative educational research, but this event was held on the 40th anniversary of our founding with goal of deepening our ties with universities in ASEAN countries, further strengthening our cooperation and mutual development by discussing issues such as the globalization of universities and the international cooperation between universities. The presidents from ASEAN universities that have an exchange agreement with Toyohashi University of Technology participated in the forum, which was the first we have ever held since our founding.

22 universities from eight ASEAN countries participated alongside the Japanese Toyohashi University of Technology, Nagaoka University of Technology, and the National Institute of Technology. Assistant Director of the Office for International Planning, Higher Education Policy Planning Division, MEXT's Higher Education Bureau, Mr. Horio greeted the attendees and gave a lecture on policies in higher education. TUT President Onishi and Datuk Prof. Dr. Asma Ismail, President of the University of Science Malaysia, both made a keynote speech, some participating universities made announcements about their international strategies, and there was a discussion in which many opinions were lively exchanged. At the end of the forum, the Chair's Statement was summarized and the results of the forum were shared.

We also hosted a reception on December 18, the day before the forum, which many people attended, including members of the Japanese consulate in Penang, representatives from Japanese and foreign companies as well as forum attendees. We expressed our gratitude to the attendees for their continued support of our educational and research activities in Penang and had a discussion.

This forum provided us with an opportunity to reinforce our cooperation and collaboration with universities in the ASEAN region and local companies, and promote the further international development and globalization of our university. 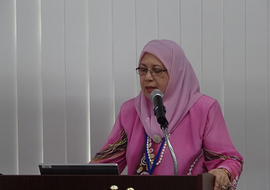 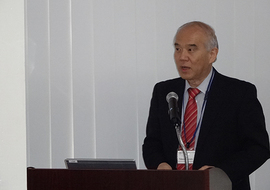 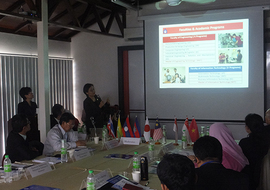 A presentation by one of the participating universities 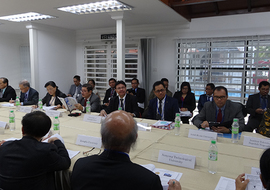 A group photo of all the forum attendees