University introduction and exchange of opinions

When Japanese Prime Minister Shinzo Abe visited Uzbekistan in October 2015, he announced that Japanese universities would support Uzbekistan for the advancement of higher education. After discussing the cooperation among related universities and ministries of both countries, it was agreed to invite young researchers to advanced research facilities of Japanese universities, as the first opportunity for its support.

Visiting Toyohashi University of Technology on 19th May, they exchanged information freely about themes such as educational and research environment in the morning, after being given the presentation about Toyohashi University of Technology. In the afternoon, they visited world-leading research facilities of Electronics-Inspired Interdisciplinary Research Institute (EIIRIS) and Center for Human-Robot Symbiosis Research. Along with being shown the research projects and touring the facilities, they lively exchanged their opinions among other researchers. 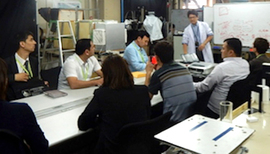