This visit came about after Toyohashi Tech invited teachers from the New Mongol High School to Japan as part of the overseas high school teacher invitation program held from June 29 to July 1. The Academy's director-general and its technical college principal became more interested in Toyohashi Tech and arranged for a visit.

They made a courtesy call to President Takashi Onishi, and with Trustee/Vice President Mitsuteru Inoue and Professor Takaaki Takashima present, our two visitors introduced the New Mongol Academy, and exchanged ideas regarding education systems and future collaboration.

They also had a chat with Toyohashi Tech international students who came from New Mongol High School, and became friendlier by checking on their activities as graduates in Japan and exchanging information.

They had limited time for their visit, but it was an extremely valuable opportunity for Toyohashi Tech to further exchange with the Mongolian high school and technical college. 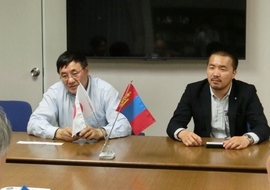 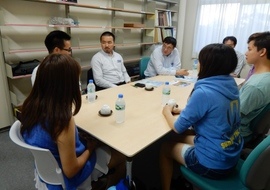