As a part of the "Tri-Institutional Collaborative / Cooperative Educational Reform Project" under the National University Reform Enhancement Promotion Project, and in order to adequately respond to the advance of globalization facing universities and technology colleges, Toyohashi Tech began an overseas training initiative for administrative staff from academic year 2014.
The purpose is to increase the natural talents, and to encourage spontaneous ability development, in the future leaders that will be responsible for organizational reform towards globalization by having them accumulate actual international experience where they make free use of English in Penang, the location of Toyohashi Tech's education base in Malaysia.

In academic year 2014, Toyohashi Tech, Nagaoka University of Technology, and the various technology colleges of the National Institute of Technology sent eight staff to Penang, where they were able to improve their English abilities through running the international conference at Toyohashi Tech's education base in Malaysia, and exchanging ideas with staff at the Universiti Sains Malaysia.

This report meeting was held virtually through the distance learning and meeting system, GI-net, which connects the three institutions' 59 nationwide locations with high-speed dedicated communication lines, thereby connecting all of the participants at their various institutions. Mr. Suzuki, Director General of Toyohashi Tech began the gathering with his opening address, which was followed by reports on the participants' activities in Penang, achievements gained through this training, and its impact on their future work, as well as suggestions for improvements in future iterations of this program. There was a question and answer session after their reports, followed by comments from Dr. Onishi, President of Toyohashi Tech, Dr. Inoue, Director of Toyohashi Tech, and Dr. Kuroda, Director of National Institute of Technology, which culminated in President Onishi presenting a representative of the trainees with a certificate of completion. Finally, Mr. Seno, General Manager of Administrative Affairs at Nagaoka University of Technology gave words of encouragement to the trainees to close the session.

Toyohashi Tech will continue to implement English training to improve the skills of our staff as a part of the Tri-Institutional Collaborative / Cooperative Education Reform Project.

Report Meeting at the conference room
of Toyohashi Tech 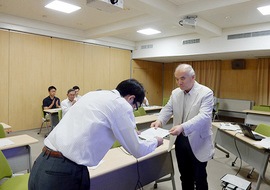 President and the representative of trainees