For two weeks from Monday, 1 June through Friday, 12 June, Toyohashi University of Technology hosted an exchange program in which we welcomed five students from Queens College, City University of New York.

Toyohashi Tech entered an exchange agreement with Queens College in 2013, and during the 2014 academic year, as a part of the "Tri-Institutional Collaborative / Cooperative Educational Reform Project" under the National University Reform Enhancement Promotion Project, we sent faculty from our university and other national technology colleges to Queens College for six months (July-December) to undergo the Long-Term Faculty Development Program for Nurturing Global Education and Research Abilities.

Hosting these five students was originally planned for the sake of mutual exchange, and by experiencing discussions, Japanese culture, and student life together with the students from Queens College, the academic year 2015 long-term faculty development instructors (who are planning to study at Queens College from the end of June) and students from Toyohashi Tech were able to grow as people who have the perspective needed to be active globally.

In this program, titled "Culture & Technology Class", students from Queens College and Toyohashi Tech, together with instructors in the long-term faculty development program, discussed issues that are shared by all countries, including stereotypes, urban vs. rural issues, and disasters and rebuilding. Through each of these topics, the participants gained awareness of the differences in their cultures and approaches by touching on the unique challenges of each other's countries, and with these new perspectives and ways of thinking, they were able to gain further mutual understanding.
On the final day of the program, each of the students from Queens College took what was discussed and gave a presentation summarizing their thoughts. The audience were engrossed in the presentations, and a lively discussion took place during the question and answer period.

Furthermore, through this program, the Queens College students took special lectures and experienced technology in the various faculties on campus to broaden their views on Japanese technology. They also participated in student extra-curricular activities (clubs and circles), and experienced a sample of Japanese culture and student life together with Toyohashi Tech students.
Moreover, on the seventh day of the program, they visited the Futagawa Shuku Honjin Museum, where they learned about post stations in Edo-era Japan, and with the cooperation of Toyohashi International Association's Azalea Club, they were able to experience a tea ceremony and flower arranging in a day of Japanese cultural experiences.

It was a short two weeks, but the participants from Queens College and Toyohashi Tech experienced different cultures and ways of life, providing a good opportunity for them to reflect on the meaning of mutual understanding. 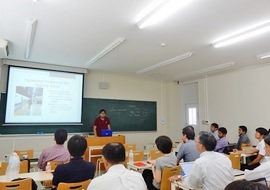 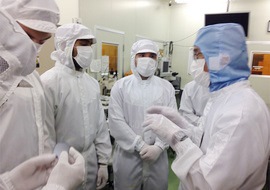 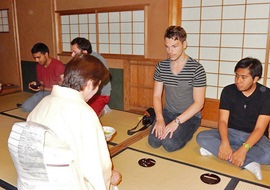