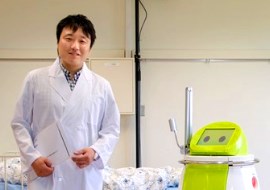 Given the threat of a massive earthquake striking Japan, Toyohashi Tech researchers have organized a cooperative project team to develop new robot. This team consists of engineering researchers, medical doctors, and software/hardware companies in Fukushima and Toyohashi. They set about determining the factors that are most important to hospital patients in modern society, after which they set about developing the world's first medical round robot capable of job-sharing, making more time for face-to-face nursing care.