This prize is awarded to several outstanding papers among 337 papers from 25 countries on the 14th The International Conference on Control, Automation, and Systems (ICCAS), which was held on 22-25 October 2014 in Korea.
The Conference was inaugurated in 2001 to bring together researchers and engineers, who are specializing in the theories and applications of control, automation, and systems engineering. 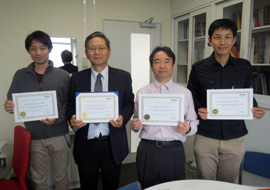