On Sunday June 1, in the large gymnasium at the National Olympics Memorial Youth Center, Tempaku no Kaze, a team comprised members of the TUT Robocon Club, reached the semifinals of the NHK Robocon University Robot Contest, which doubled as the ABU Asia-Pacific Robot Contest selection trial.
Although the team was unable to progress to the final of the event, they secured a position among the top 4.

The theme of the Robocon 2014 is "A SALUTE TO PARENTHOOD". The team successfully completing various game activities in the park with their Parent robot and Child robot first; accomplishes "SHABAASH" (appreciation) is declared "The Winner".

Tempaku no Kaze won from the preliminary by winning every match, and accomplished "SHABAASH" splendidly at the quarterfinal. The team reached the semifinals and got the Idea Prize and the Special Prize.
The president Takashi Onishi and the supporters cheered them at the contest. 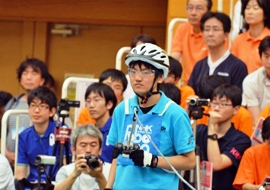 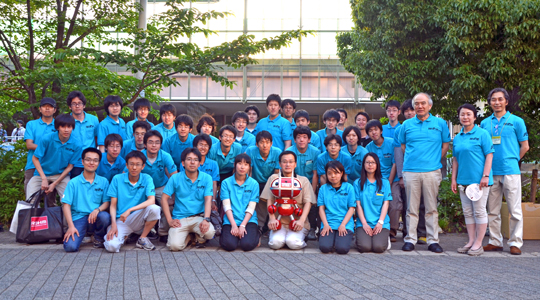