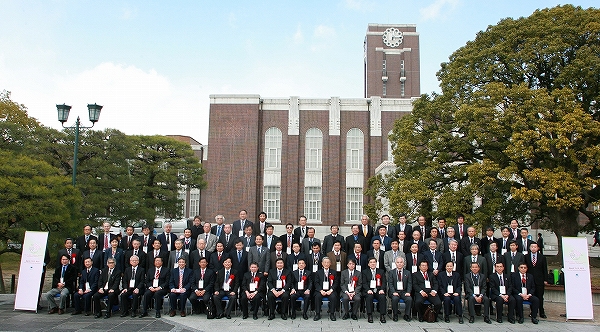 The 2nd Conference of University Presidents in Japan and Vietnam was held at the University of Kyoto on March 12 and 13, and in which Toyohashi Tech President Sakaki and Vice President Tsunoda participated.

A total of 41 Japanese universities and 21 Vietnamese universities participated in the conference, and discussions took place on the subjects of exchanges in student and research activities, securing quality of higher education, and education of highly professional personnel, under the general theme of "Enhancing cooperation in educational research between Japan and Vietnam."

The first such conference was held in Hanoi, Vietnam, in 2009 in order to contribute to exchange activities in higher education between both countries.
Our President Sakaki participated in the conference on two consecutive occasions.

Dr. Ngyen Ngoc Binh, President of Vietnam National University Hanoi College of Technology, which is one of our partner universities, also attended the conference.
Dr. Nguyen Ngoc Binh is an alumni of Toyohashi Tech and was given an honorary doctorate at the 35th Toyohashi Tech anniversary, held in last November. [See the detail]
He is also the President of the Japan Alumni of Vietnam.

The 3rd Conference will be held in Vietnam in 2013, which date falls on the 40th anniversary of establishment of diplomatic relations between Japan and Vietnam.