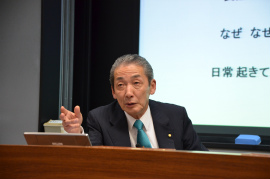 Mr. Hayashi, Executive Advisory Engineer, Toyota Motor Corporation, spoke on "Manufacturing and Risk Management - the Philosophy and Evolution of the Toyota Production System - What is expected now?" in the 16th Prestige Lecture.  A total of about 160 people including faculty members, students, and members of the general public attended the lecture meeting.
First, Mr. Hayashi cited the reconstruction work done on the Renesas Electronics Naka Factory, which was damaged by the Great East Japan Earthquake on March 11, 2011.
He explained that it was the Toyota Production System (TPS) that enabled the recovery work on the extensive damage done to be carried out in a surprisingly short-time; specifically the philosophy of the TPS is to
(1) look after your own property,
(2)  visualize the problem,
(3) thoroughly see for yourself the reality on site, and
(4) make snap decisions and speedy implementation. 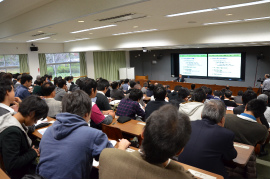 Furthermore, he spoke on the philosophy of 'Just in time' which is the core of the TPS. On the one hand, there is the concept that the "customer comes first"; i.e. supply high-quality, low-priced products in a timely manner by producing good items and not defective products.
On the other hand, there are corporate financial reasons that the revenue needs to be collected quickly during financially difficult times.
Therefore, the concept of manufacturing products at the same rate as they are sold is important.  If the products are manufactured at a faster rate than they are sold, then they would stagnate.
One must see the production site and always visualize the problems, and then lessen the problems one by one. Thus a system that precedes the improvements was established.
The concept of 'Just in time' enhances and eventually leads to strengthening of the characteristics and human resources of the corporation.
However, he said that the system itself and its introduction is not the goal but it is a measure of the improvement.  In order to continue making improvements, it is important that management be on the production site, is specific about the daily problems and follows them up timely and steadily.
Mr. Hayashi also mentioned the impact of the appreciation of the Japanese Yen and the problems the Japanese economy is facing.
Whereas we must run away from the Tsunamis caused by big earthquakes, we cannot run away from the appreciation of the Yen.
If we move abroad, we would not be able to return to Japan.
He continued by saying that we must defend our industries that have a broad base at all costs and we must continue manufacturing products that only Japan can do.
The only resource that we still have in Japan is "human resources". 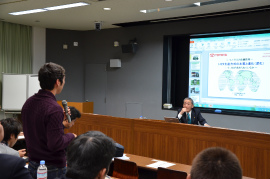 In closing, he inspired the students, saying that industry requires engineers that have intelligence and expertise in a wide range of skills rather than in specialist areas.
In the undergraduate school students acquire basic knowledge, and in the graduate schools students study how to investigate new phenomena.
Mr. Hayashi roused the students saying "you will have mountains to climb!" and "the future awaits you!" after which he concluded the seminar.