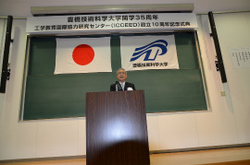 On November 16th, the 35th Commemoration of the Toyohashi University of Technology, together with the 10th Anniversary of ICCEED was held.

The President, Professor Yoshiyuki Sakaki, looked back over the previous 35 years that our University has been in existence and categorized them into five periods; the first period, dubbed the "Big Dream", covered the earliest days, including the opening the University, the second period was defined as "Growing", the third period encompassed a "Significant leap forward", which was followed by a fourth era characterized by "Turbulence and change".
The time since 2010 is when we face a "New Challenge". Currently, the University has been addressing new projects, including the reorganization of both the Undergraduate and Graduate schools, the initiation of a "tailor-made button-zone educational program", and the establishment of EIIRIS.
Furthermore, ever since its opening, the "Internationalization of the University" has been an important theme.  In particular, the University has worked aggressively to support advanced education in the developing countries.
Lead by the ICCEED, which was established in 2001, and with 10 years of history as a unique National Institute, the University will continue to progress toward globalization on various fronts. 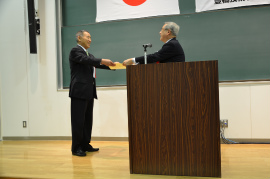 After his speech, Certificates of Appreciation were presented to the OSG Company Ltd and five local credit unions (Shinkin); that is, Toyohashi, Toyokawa, Okazaki, Gamagori, and Hamamatsu.
Then, 15 students from the excellent Technological Scientist training program were given commendations.

As a representative, Mr. Ren Sato, Senior student on the Civil Engineering course was awarded a Certificate of Commendation, while Mr. Taku Takagi, Senior student in the Materials Science Engineering Department, made a speech of appreciation.
Mr. Nobuo Kamino, Special Advisor to our University and Senior Adviser to the Chubu Gas Company, made tremendous efforts on behalf of our University at the inception of our Invitation Strategy, and since the opening of the University he has held prominent positions such as Advisor and Member of the Executive Board.
He was presented with the University's first Honorary Doctorates, along side Mr. Nguyen Ngoc Binh, who was a graduate of our University and who is currently the President of the Vietnam National University, Hanoi, University of Engineering and Technology. 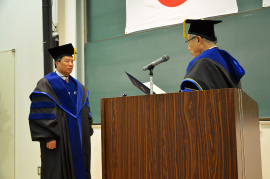 After the award, Mr. Kamino said in his speech that he well remembers and fondly recalls the invitation strategy centered on the Junior Chamber, and how all of the citizens of Toyohashi were become involved in the establishment of the University that would educate Scientific Engineers in Toyohashi City.

Toyohashi University of Technology will continue to accept the challenges presented by the future.  We appreciate your support and understanding of the University from now on.