Looking back on the 2019 Homecoming

On November 16, Toyohashi University of Technology held Homecoming 2019, marking the first such event for the school. The event was organized in partnership with the alumni association, and was based on a theme entitled "Let's gather at the university, Toyohashi, and the land of youth!" In addition to past graduates, honorary professors and former faculty members also participated along with current students and staff. With over 210 people in attendance, the event was a great success.

President Onishi and alumni association president Furuno provided the opening speeches, followed by commemorative talks from seven faculty members representing the courses of study from their respective time at the school. In the morning, facility tours were conducted by each department. In the evening, the university joined the alumni association to organize a reception in the dining hall.

In a speech about "the current state of Toyohashi University of Technology," president Onishi explained how the school was being reorganized, and talked about its efforts to promote internationalization. He also provided an update on university facility expansions, and explained how the university was strengthening its relationship with graduates. The commemorative talks included humorous accounts from graduates about hardships in school and after graduation. The audible laughter from the audience was a testament to the event's success.

Post-event surveys included comments about how fun the event was, how enjoyable it was to return back such a formative place, and how rejuvenated participants felt after hearing about the activities of their fellow alumni.

The reception at the end maintained a warm and friendly ambiance throughout its duration. There were many meaningful moments, with beloved former teachers and friends boisterously reuniting, and people comfortably chatting with one another. 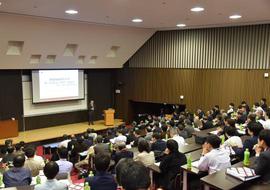 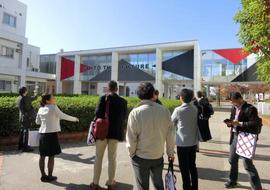 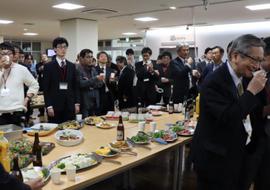