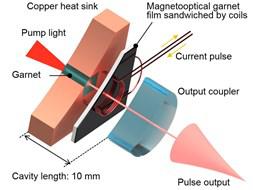 An international team of scientists has produced the first high-powered, randomly polarised laser beam with a "Q switch" laser, which typically emits pulses of light so brief that they're measured in nanoseconds.

Lasers are a critical part of modern technology--they're used in everything from our automobiles to medical equipment to the satellites orbiting Earth. Now, researchers are broadening the potential applications of even smaller and more powerful lasers.

The researchers published their results in Scientific Reports, an open-access Nature journal.