On November 9, the mayor of Toyohashi City, Mr. Koichi Sahara, delivered a special lecture titled 'To Our Future Leaders - What We Expect from Toyohashi University of Technology'.

The lecture was attended by around 120 staff and students, and Mr. Sahara, who majored in engineering at university, spoke to the students with humor about his own student life, the work he has experienced so far at the Ministry of Land, Infrastructure, Transport and Tourism and other institutions, as well as the projects he is working on as mayor of Toyohashi City, and his objectives as the leader of a self-governing body.

He spoke passionately about the fun and the rewards of engineers becoming involved in business management, and gave the students valuable advice about their future.

In the Q&A session after the lecture, not only did the listeners ask Mr. Sahara questions, but Mr. Sahara asked the students about their vision for the future, and there were many moments when Mr. Sahara was engaged in conversation while standing at the lectern, proving to be a very exciting event. 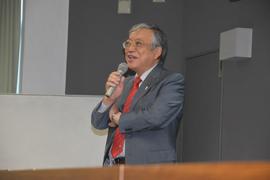 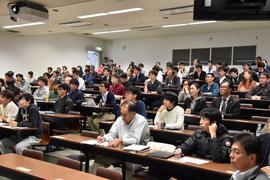